The Flying Bridge is located atop the Pilothouse and is the highest level on the ship, excepting maintenance ladders scaling the mast and smokestacks.

The main feature of the flying bridge is the Mk-37 remote gun director which controls the 5-inch guns and the 36-inch searchlights. Five men manned the tight confines of the director: three in front seated side-by-side and two in back. The middle seat up front acted as a hatch, with all three climbing an access ladder from the pilothouse interior, the middle man entering last and dropping the hatch/seat down behind him. The two men in the back had a similar deck hatch access. The director could also be accessed via overhead hatches.

The gun director was a rotating box that contained optics and radar for locating and tracking targets. From the gun director, information on target course and speed was fed automatically into the Mark-1A fire control computer located in IC-PLOT. A Mk-12/22 radar array is mounted directly atop the gun director. Equipment contained inside the director include a 15-foot stereoscopic rangefinder, two telescopes, and a slewing sight.

Also on the flying bridge just forward of the gun director are two lookout stations and a chart table. Consisting of two swivel chairs on which are mounted swing-arm binoculars, sailors on lookout duty could use these to immediately alert those on the bridge below of any contacts sighted. Compass-like dials that remained stationary while the chair swiveled allowed them to give a bearing while the swing arm provided elevation. 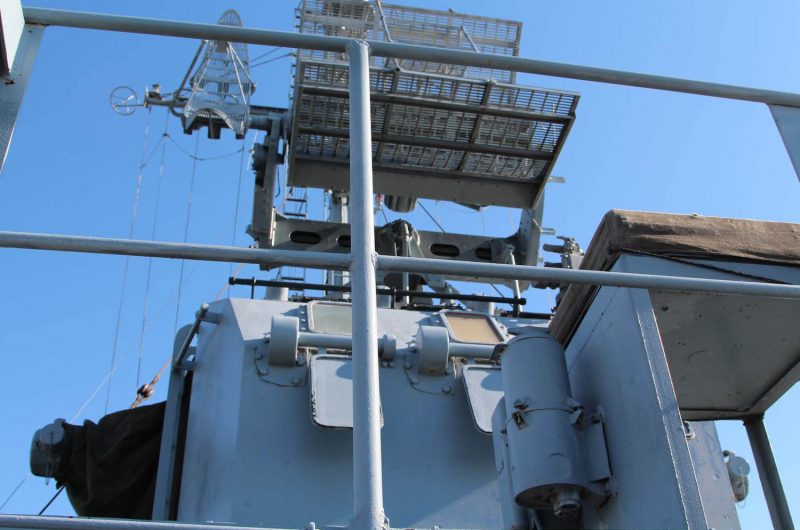