The next items of note are the amidships 20mm anti-aircraft guns. The black boxes sitting atop the gun are the magazines (which hold the bullets, or shells). These guns used fixed ammunition. Notice that the left-hand magazine is painted with a white stripe. This allowed the ammunition handlers to know which side the magazine went on and avoid confusion in heat of battle. Each magazine holds 60 shells for a total load of 120 rounds. The gun itself can fire approximately 450 rounds per minute, making the barrels glow red hot. A handler with asbestos gloves would change out barrels whenever the gun was being reloaded. The hot barrels would be placed in a tube to cool. The 20mm guns could fire at a maximum range of 14,400 feet (2.73 miles) at a 35° angle.

The 20mm requires no external power to operate. They were standard short-range weapons during World War II, used primarily in surface-to-air combat, but also for engaging smaller water craft and for destroying floating mines. The number of personnel for a 20mm gun crew was variable; the number of ammunition handlers dependent upon the location of the ready service lockers.

You will also notice in the break between the deck houses what appears to be a large gun of some sort. This was the 5″ gun practice mount. The gun crews for the 5″ guns would practice loading and firing on this mechanism in their spare time. This prepared them for the grueling task of hoisting 55-pound shells and powder casings several times a minute and to do so in a timely and efficient manner. 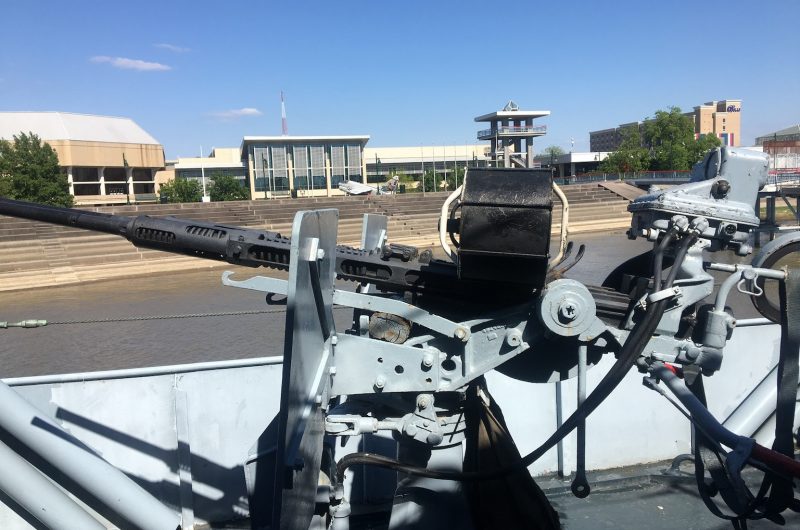