Is an Arleigh Burke-class destroyer in the United States Navy. She is the third Navy ship named after Rear Admiral Isaac C. Kidd, who was on board Arizona during the attack on Pearl Harbor, and was the first American flag officer to die in World War II.

While in the midst of final outfitting, the ship was holed and partially flooded at the shipyard docks during Hurricane Katrina on the Mississippi Gulf Coast, requiring a return to dry dock for repairs, which included cutting out a turbine, delaying her commissioning and deployment with the Navy. She was commissioned at Galveston, Texas on 9 June 2007. Kidd is currently homeported in Everett, Washington.

In the 2009 science fiction film Transformers: Revenge of the Fallen, USS Kidd fires at and destroys a Decepticon named Devastator with a railgun (mounted in place of the standard 5-inch gun) during the movie’s climactic battle in Egypt. Moments earlier in the film the captain of USS John C. Stennis queues USS Kidd into action but the hull of USS Preble is shown instead. The footage of the combat information center and the forecastle with the railgun was shot on USS Kidd.

On 5 January 2012, Kidd rescued the 13-member crew of the Iranian-flagged fishing vessel Al Molai from Somali pirates who had been holding them hostage for over 40 days, capturing fifteen pirates in the process with no casualties.

On 10 March 2014 the ship joined the search for Malaysia Airlines Flight 370 two days after it went missing over the South China Sea. Kidd was the second Navy ship to be deployed in the search. It joined USS Pinckney, and more than 40 other ships and 32 aircraft from Malaysia, Australia, China, India, Thailand, Indonesia, Singapore, Taiwan, Vietnam, New Zealand, and the Philippines taking part in the search and rescue. On 14 March it was announced that Kidd would be relocated to the Indian Ocean in search of the plane, since new evidence points to the possibility of the plane being there.

On 24 April 2020, the United States Navy reported that a sailor assigned to Kidd had tested positive for the virus after being medically evacuated the previous day from operations at sea. After the sailor’s test returned positive, the Navy sent a medical team to the ship to conduct contact tracing and test sailors for the virus on board. By the morning of 24 April, 17 additional sailors had tested positive. 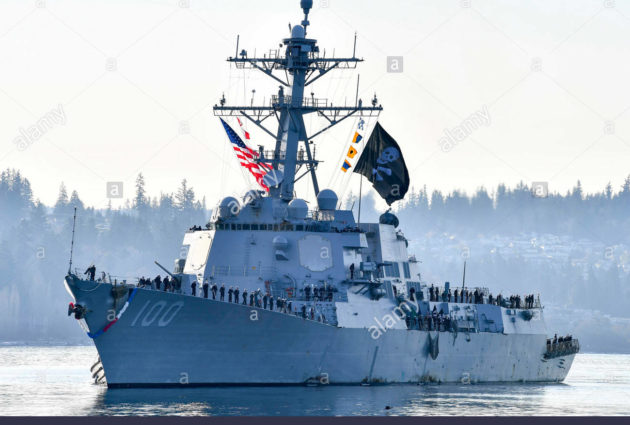