Depth charges were the primary weapons aboard the KIDD used against submarines in World War II. When a submarine was detected, a pattern of depth charges was laid down over the suspected area so as to saturate it with a series of concussions intended to disable or destroy the submarine. These charges were not set off by contact, but rather by hydrostatic pressure. The desired depth at which the charge needed to go off was set prior to firing.

You will see two types of depth charges during your tour of the KIDD. The first is the 300-lb. Mk. 6 depth charge, more commonly known as an “ash can.” Cylindrical in shape, they tended to tumble in water and took longer to sink. The second is the 200-lb., Mk. 9 depth charge. Appropriately dubbed “tear drops,” their streamlined shape and fins allowed them to sink faster. The KIDD started her World War II career in 1943 with mostly ash cans in her anti-submarine arsenal. By war’s end in 1945, tear drop designed depth charges had all but replaced them, thus demonstrating the rapidly advancing technologies developed during wartime.

On the fantail, two horizontal depth charge tracks are located on each side, angled slightly outward. The tracks allowed depth charges to roll off the rear of the ship. They could be controlled locally or fired remotely from the bridge. Depth charges were also fired off the sides of the ship using depth charge projectors. Known as K-guns because of their appearance, these weapons could hurl a 300-lb. depth charge over the side anywhere from 60 to 150 yards in distance. Each K-gun had a breech and a black powder cartridge that expelled the depth charge. These weapons could also be controlled remotely from the ship’s bridge.

Suspended on the bulkhead of the deckhouse near the starboard K-guns, you will notice a basket stretcher. Termed a Stokes litter(after the name of its inventor), it is used to transport injured around the ship and up and down ladders. It is also used to transfer injured between moving ships by highline, or a trolley rig. You will see several Stokes litters throughout your tour.

Also located near the K-guns on both port and starboard sides are two of the ship’s life rafts. Notice that the raft had no solid bottom, but rather a wooden plat in the middle. Wounded had the first priority when the ship began to sink. The small rope bundles ringing the exterior of the raft were called lifelines. Sailors floating in their kapok lifejackets would tie themselves off to the raft with these lines. The idea was to keep everyone together in a large group so as to keep from becoming scattered and to be easier to spot from the air by rescue parties. The crew, however, had another grimmer name for these lines: “shark lines.” Many sailors of sunken ships fell victim to shark attacks before help could arrive.

Just between the life rafts and the quarterdeck and just above head-level, you’ll see what looks like an open-topped cage filled with floats. These were floater nets. In the event that the ship was sunk, the nets would float free and act in the same manner for the survivors as the rafts’ lifelines: keeping the men together in one spot. 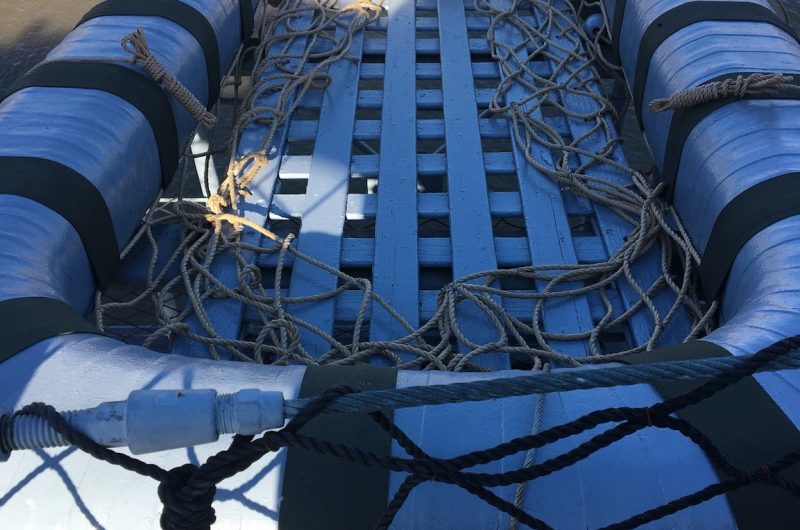