As you approach the ship and come down the gangway, be certain to examine the KIDD from this vantage point. One of the first things that you will notice are her signal flags flying from the mast. The signal flags are the ship’s call letters: NYKF (from top to bottom). As all radio stations and television stations have call letters, the KIDD’s radio station has call letters too. They are normally flown to identify the ship when it enters or leaves port. There is a signal flag for each letter of the alphabet and each number, zero through nine.

The KIDD was also authorized to fly a pirate flag, the Skull & Crossbones. This unusual request was granted by the Admiralty at the request of Rear Admiral Kidd’s widow at the ship’s commissioning. She is the vessel ever given official sanction in the history of the U.S. Navy to fly this flag.

Also from the gangway, you can see the pirate painted on the Number One smokestack. The crew of the KIDD called themselves the “Pirates of the Pacific.” This was due, in part, to the name of the ship. While named after Rear Admiral Kidd, many of the crew looked back in maritime history to Captain William Kidd, a famous pirate from sailing days. And so the first crew of the KIDD (called plankowners) chose the pirate as their mascot and painted his likeness on the stack, flying the Jolly Roger from the mast. They also lived up to their nickname of “pirates” by “ransoming” rescued pilots and aviators to the fleet’s carriers for ice cream, a practice carried on by most destroyers.

Take special note of the bow, or front, of the ship. It was reinforced for ramming submarines. The sonar dome is welded to the keel (bottom) under the forward section of the ship and contained the sonar transducers that produced sonic pulses and received the echoes. The shell plating is bolted and welded in strakes, or rows. Plating thickness varied from 3/4″ to 3/8″. This is why destroyers were known as “Tin Cans.”

The propellers are 12 feet in diameter and made of bronze. They rotated in opposite directions for balance. They came out of the hull through the stern tube and were supported by the shaft strut. The rudder was the device that steered the ship. It was angled by a hydraulic ram, port or starboard (left or right). Pieces of zinc were attached to the hull in the area of the propellers and the steel hull. Thus, the zinc would waste away before one of the other metals had a chance to corrode.

If you are visiting during the latter part of the year, you will see the KIDD sitting high and dry in her cradle. This unique design allows her to compensate for the seasonal rise and fall of the Mississippi River each year. The water level of the Mississippi in Baton Rouge can vary as much as 40 feet each year!!! Each spring when the snow melts in the Rocky Mountains, the Appalachians, and throughout the Midwest, the resulting waters flow into the river systems and empty into the Mississippi River. The added rainfall of the spring does the same. As a result, the waters of the Mississippi rise until the KIDD lifts off of her cradle and floats at her mooring. When summer comes, the rainfall up north slackens, the river falls, and the KIDD sits back down in her cradle, drydocked for another year until spring comes again. 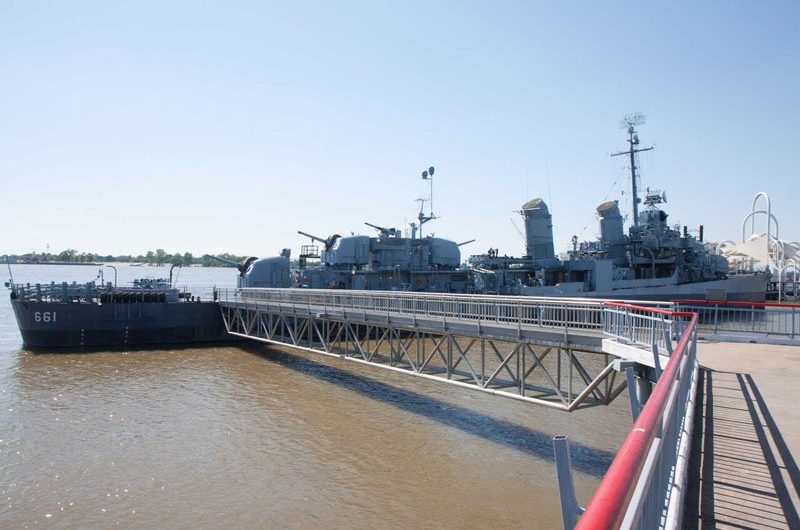 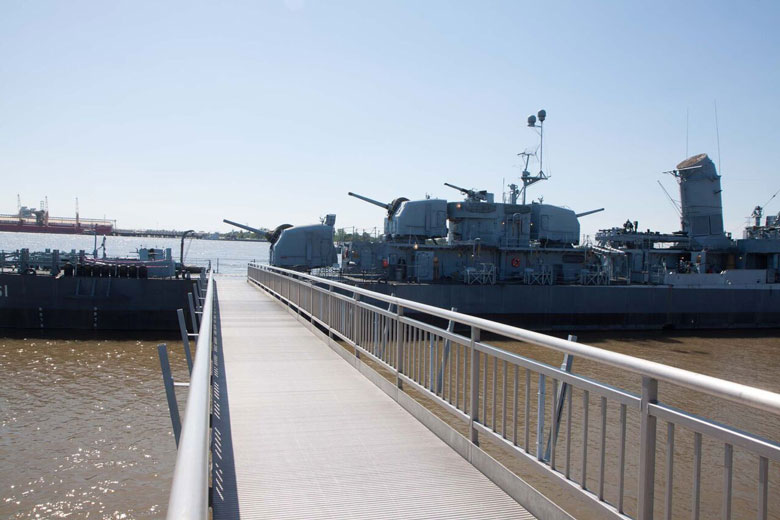