Was the lead ship in her class of destroyers operated by the U.S. Navy. Derived from the Spruance-class, these vessels were designed for air defense in hot weather. The vessel was the second named after Medal of Honor recipient Rear Admiral Isaac C. Kidd, who was aboard USS Arizona during the attack on Pearl Harbor, and was the first American flag officer to die in World War II.

Originally named Kouroush, the ship was ordered by the Shah of Iran, but was undelivered when the 1979 Iranian Revolution occurred. Subsequent to this, the U.S. Navy elected to commission the Kidd-class for service in the Persian Gulf and Mediterranean, as they were equipped with heavy-duty air conditioning and were also well suited to filtering sand and the results from NBC warfare. Kidd-class ships were known in the fleet informally as the “Ayatollah” or “dead admiral” class.

On 8 December 1982 the destroyer deployed to the Mediterranean and the Indian Ocean under the command of Commander William J. Flanagan, Jr..

From 30 May 1985 Kidd took part in U.S. Sixth Fleet operations in the Black Sea through 3 June. USS Kidd cut short a port visit to Haifa, Israel, on 16 June in response to the TWA Flight 847 aircraft hijacking.

In September 1987, under Commander Daniel Murphy, USS Kidd was awarded her third Battle Efficiency “E” award while deployed as part of the Middle East Force 3–87. Kidd led the first ten convoys of Kuwaiti tankers which were reflagged with American flags. This reflagging was in response to Iranian threats to close the Persian Gulf shipping lanes, through which more than 50% of the world’s oil output passes.

On 9 January 1991 USS Kidd departed from Norfolk, bound for the Persian Gulf, along with USS McInerney, in support of Operation Desert Storm. Kidd faced several roles while operating in the Persian Gulf, among them the location and destruction of naval mines and maritime interdiction force operations. To assist in these duties, a detachment from Anti-Submarine Light Helicopter Squadron 34 (HSL-34) was embarked. The “Green Checkers” came aboard with two SH-2 helicopters which were used early on in SSSC missions – flying beyond the visual horizon of this warship to visually observe all radar contacts on the surface. In early April, two U.S. Army OH-58 AHIPS helicopters were embarked, giving a total of four helicopters embarked on board Kidd at one time.

In December 1991 USS Kidd was again awarded the Battle Efficiency “E”, this time for excellence during Desert Shield and Desert Storm.

In October 1992 Kidd was deployed in counter-narcotics operations off the South American coast. USS Kidd transited the Panama Canal on 8 November 1992. During this mission, she patrolled Latin American waters as a deterrent to smugglers of illegal contraband. A detachment from the Anti-Submarine Light Helicopter Squadron 34 (HSL-34) was carried on this cruise. In December 1992 USS Kidd was awarded her sixth Battle Efficiency “E”. Admiral Isaac Kidd, Jr., USN(Ret.) presented this award to the crew at a pierside ceremony.

USS Kidd was assigned to Carrier Task Force 60 (CTF-60) in October 1994, forming around USS Dwight D. Eisenhower. During this period, the task force provided support of the naval weapons and ammunition embargo of the war-torn republics of the former Yugoslavia (“Operation Sharpguard”), the enforced no-fly zone over the area (Operation Deny Flight), and air drops of humanitarian aid to the residents of the city of Sarajevo (“Operation Provide Promise”).

The vessel has been renamed ROCS Tso Ying, a Kee Lung-class guided-missile destroyer currently in active service of Republic of China Navy. She was formally commissioned at the Su-ao Naval Base in northeastern Taiwan on 2006-11-03, along with her sister ship, ROCS Ma Kong. She was the third former Kidd-class vessel commissioned by ROCN. 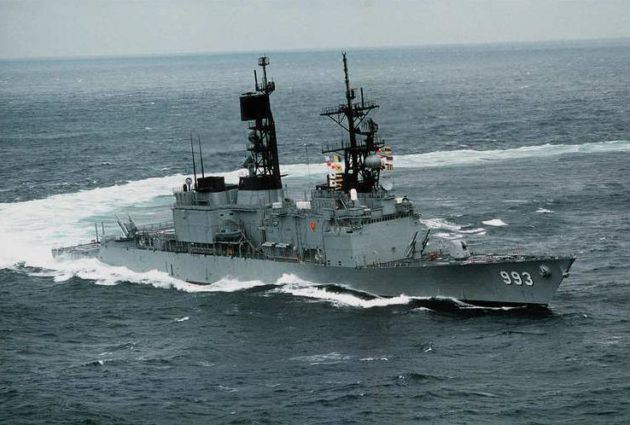